“Voice tasks can be thought of as a window by which one can see functionality of the human body that is not obvious by just looking at someone.” -Dr. Kara Chappie

Voice tasks were once isolated to advanced clinical laboratories, but with ubiquitous smartphones, the technology to record and analyze a person’s voice is in almost every home. This technology could aid in the movement for more virtual clinical trials. As the general public becomes accustomed to voice analysis with technology such as Siri or Alexa, using voice analysis for diagnosis and treatment monitoring goes from an idea to reality.

BrainBaseline has partnered with voice engineer, Dr. Kara Chappie, since 2019 to add voice tasks to their platform. Dr. Chappie has been studying acoustics since her graduate school work at Yale University. After working in underwater acoustics for a decade, Dr. Chappie reached out to a research team studying speech changes of individuals with Parkinson’s Disease. She joined that team and has been studying speech for the last 2 decades, focusing on speech in individuals with Parkinson’s Disease, Ataxia, respiratory infections, and depression. Dr. Chappie’s studies look for anomalies or changes over time in speech that may indicate the presence of a condition or disease. She focuses on quantitative acoustic measures of speech that are extracted using signal processing techniques.

In the beginning of Dr. Chappie’s research on speech changes, her team of research collaborators wanted to try voice recording over telephones (landlines) to accommodate subjects that could not make it into the clinic because of their condition. In the early 2000’s this was such a novel concept that Dr. Chappie decided to test that idea with her grandparents that were 1700 miles away. She used the built-in microphone on her late 1990’s laptop to record her grandparents over her landline telephone. Her grandfather had diagnosed Parkinson’s Disease and her grandmother did not. From that crude recording she could see Parkinson’s Disease characteristics in her grandfather’s recording but not her grandmother’s. This opened up an entirely new way of thinking about voice collection and demonstrated to Dr. Chappie and the team that recordings did not have to be taken in a controlled clinical environment to produce meaningful information.

BrainBaseline’s addition of voice tasks into their clinical trial solution allows for voice data to be combined with subject data gathered from BrainBaseline’s digitized surveys (ePROs), cognitive testing tasks, active tasks, and continuous data capture. Since speech has both neurological and muscular components, voice tasks allow for many additional digital biomarkers. Current BrainBaseline work looks into using voice tasks for disease detection, disease progression, and treatment effects. Below are the voice tasks that BrainBaseline has implemented for in-clinic and at-home studies. 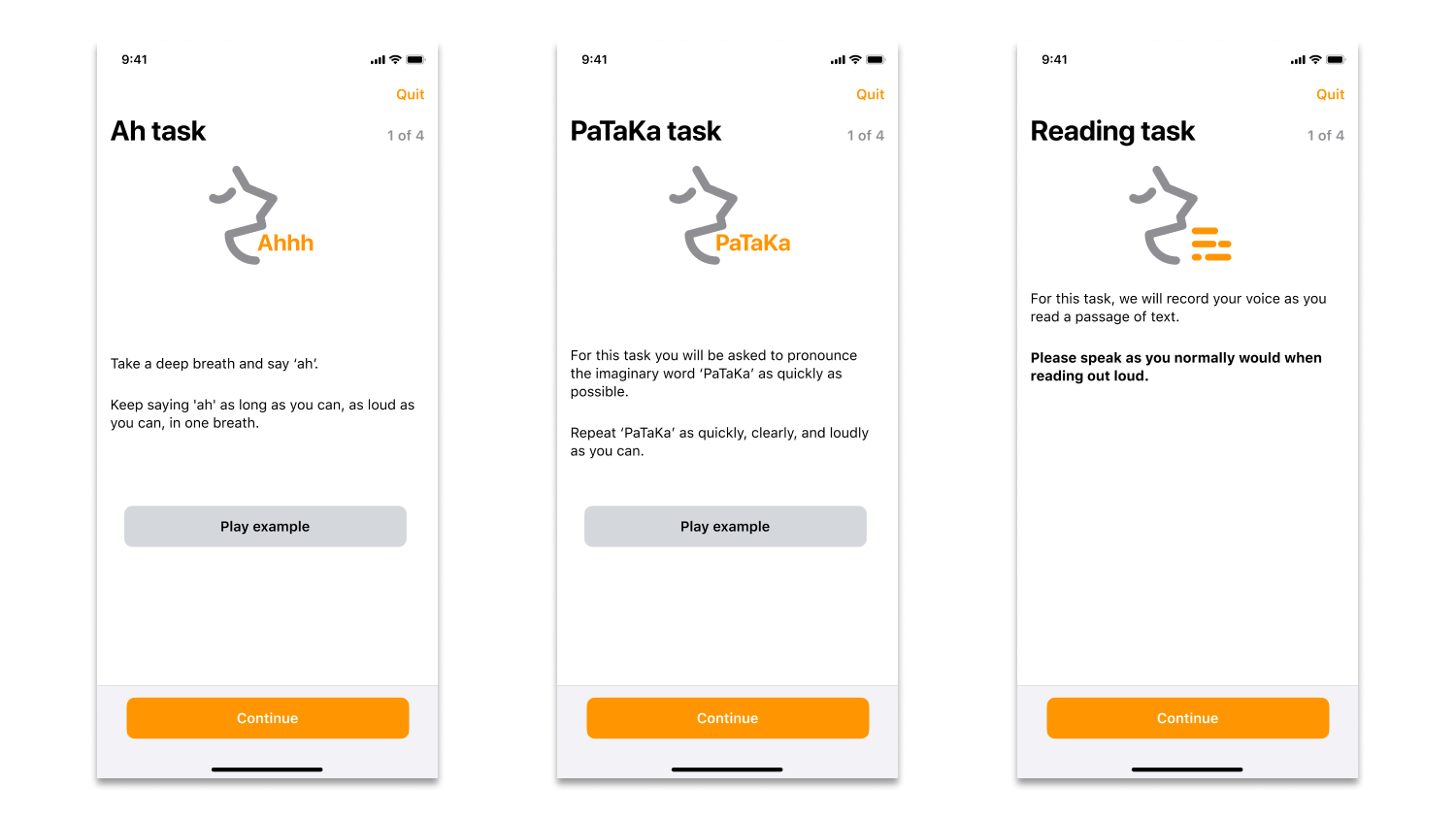 There are many variables to consider when collecting voice data, especially when it comes from an at-home setting. The variables BrainBaseline considers and accounts for include, but are not limited to:

To teach subjects which sound is desired for a task, BrainBaseline has found that having sample sounds available in the app is very effective. Sample audio is better than just displaying written example words (the traditional way) because it can be difficult to show that the sound desired is an isolated part of the word. Also, for non-native English speakers there may be additional confusion with example words. Some may worry that supplying sample audio may bias the subject, but, as Dr. Chappie puts it, “[i]f you want to study the sound and how the properties change across subjects with varying (medical) conditions, you do want them to make the sound of interest.” Also, since this is a digital permutation of the task, all the subjects will receive the same sample audio.

From BrainBaseline’s current studies they hope to learn from voice tasks taken at-home. It is important to receive clean data, but also to see which voice tasks are most embraced by at-home individuals. The Reading Task might be a lot more comfortable than the Sustained Phonation Task. Once at-home voice tasks are established as easy to take and are producing useful information, they can become a part of regular health metrics.

To learn more about BrainBaseline capabilities and what’s next, visit our solution page, visit us on Linkedin, or reach out directly.